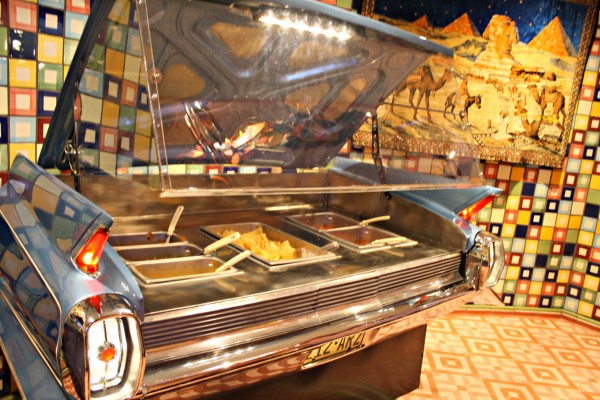 
We agree with the previous reviewer, the dining area was really, uncomfortably loud. The waiter insisted the noise was the music, but there was a loud roar coming from somewhere.

The food was really good. We had the fajitas and the chuychanga! The meats were fork tender and had a good flavor. A festive atmosphere. We will return! Arriving a little past the normal lunch time it was pm we were immediately seated, which was a surprise bonus. My first impression was on how loud the dining area was.

The hostess was barely gone when we had free chips and salsa on the table. Just a few seconds later, we had our waitress bringing more.

The salsa was great, with just a little "kick" to it, having been made from uncooked tomatoes I like it that way. The chips were nothing spectacular.

Included in the freebies was a small dish of Chuy's "Creamy Jalapeno" which I liked, but my dining companion described as a lot like ranch dressing. To me it had nothing in it that was indicitive of "jalapeno" anything. The waitress suggested the "Chika Chika Boom Boom" which was one of the two entrees ordered. The other entree recommended and ordered was the "Baja Tacos", with a choice between fish tacos or shrimp tacos. The Chika Chika Boom Boom was described as having a little "kick", and sounded great.

Once it arrived still had about a 15 minute wait for it to be served, judged not too bad since all the tables in the area were full , the entree was visually appealing. My food was the right tempreture and had good flavor.

However, the other entree of Baja Tacos had to be treated differently. The plate was crowded with the rice, refried beans, some lettuce, and 2 tacos that were individually wrapped in foil. Each taco had breaded and fried shrimp sitting inside a soft flour tortilla with some cabbage in each one.

The shrimp tacos were described as "okay" but nothing to get excited about. The two entrees filled us up, so no dessert was ordered although we saw another table getting the Tres Leche, which looked devine. The drink menu was on the table and it appeared that the mixed drinks were a little expensive.

All in all, the lunch was acceptable, but nothing to go out of the way to order again. Own or manage this property? Claim your listing for free to respond to reviews, update your profile and much more. Little Rock. Profile JOIN. Log in to get trip updates and message other travelers. Free Nacho Bar during Happy Hour!!!! Review of Chuy's.

Chuy grew up on his father's ranch in Jesus Maria, Jalisco, Mexico. In Chuy came to California to make a humble living as a farm worker in the small town of Winters, CA. Over the past ten years, Chuy's Taqueria has become a staple in downtown Winters restaurant scene. Through the success, Chuy's Taqueria has been able to undergo growth and expansion in downtown winters and into Natomas, CA.

The salsa was really good, and was slightly sweet before the spiciness kicked in. It was fresh, chunky and full of flavor. Our only complaint was that the chips were on the thin side so they kept breaking in the salsa and the guacamole we ordered. Creamy and served with a lettuce and cheese salad on the bottom, it was a large enough bowl for three of us to share. We each selected a different entree to maximize the reviewing experience.

Each dish was huge served with refried beans and Mexican rice. I underestimated how spicy that green chile sauce was going to be. I can handle some spice - I'm originally from Cajun country! It was just way too spicy. I was able to tame the spiciness with some sour cream, which really helped me enjoy the roasted chicken better. I finished maybe a quarter of my lunch before tapping out. I definitely want to go back and try a less spicy dish and a margarita! I really liked it and thought the blue corn tortillas were a unique touch.

While the dish was simple, it was done well and the portions were huge! This was definitely a milder option for those who don't like super spicy food. Our server was attentive and friendly, and the bar area was fantastically decorated with dog pictures in a kitsch diner style. I'd come back again if I was in the area, and try some margaritas or their sangria.